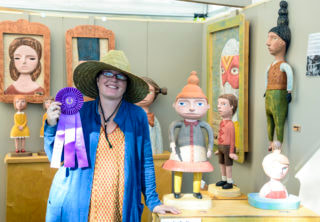 Amy Arnold
2016 Best of Show Award
Sponsored by J Gallery Interior Design Studio, La Crosse, WI
The 2016 Best of Show Award was won by Amy Arnold and Kelsey Sauber-Olds, a married team of artists who make their home and studio in Southwestern Wisconsin near Viroqua. Each focused on their own work until 2012, when Amy made her way into the wood shop and began carving. Together, they are making a cast of human and animal figures, shaping and refining basswood with hand and power tools and finishing with milk paint. Their pieces explore a balance between human and animal; wild and tame; crude and refined; humor and seriousness; adult and child; toy and art object. 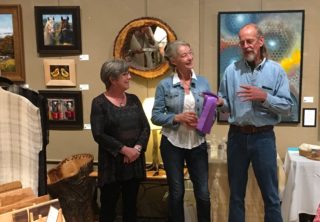 Ken and Michelle Workowski
2016 People’s Choice Award
Sponsored by VIVA Gallery Artist Cooperative, Viroqua, WI
Festival attendees selected Ken and Michelle Workowski of Viola, Wisconsin, as the winners of the 2016 People’s Choice Award. Their company, The Nature of Things, perfectly describes their art, as they create beautiful home furnishings from natural materials such as wood and bark. Pieces include birch-bark frames, poplar-bark baskets, lamps, paper lampshades, antler chandeliers, brooms, cabinetry, willow chairs and other custom furniture. Much of the material they use comes from their own land or nearby acreage.
2016 Merit Awards
Sponsored by State Street Gallery, La Crosse, WI
The first of two Merit Awards went to Amy and Matt Palmer of Bay City, Wisconsin. Amy created jewelry for over 20 years, and began a collaboration with Matt about three years ago. They have married their compulsion for salvaging old objects and materials with their shared passion for design and sculpture. Their upcycled steampunk jewelry evolves from the objects they find.

The second Merit Award went to John Craig of Soldiers Grove, Wisconsin, for his imaginative collage work, including his very popular “Lost Treasures of the Driftless” series. An award-winning graphic designer and illustrator, John’s work accompanied editorial articles in national publication such as Time, Newsweek, Esquire, Sesame Street and more. His work has been featured on record album covers, book covers, posters and in advertisements.