The following were chosen to be the 2021 Driftless Area Art Festival Performing Artists. The in-person 2021 event was canceled. We hope to be able to support these awesome local performing artists in other ways soon! 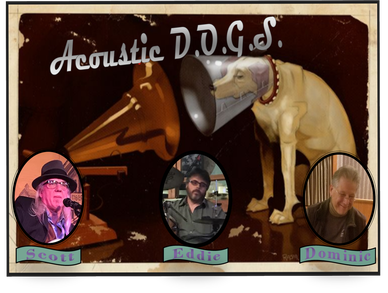 The Acoustic D.O.G.S. hails from the heart of the Driftless and features veteran performing songwriter Scott Kerry Guthrie and multi-instrumentalist Dominic Orrico. Their combined experience gives them an insider's knowledge of what makes a song reach into the hearts of the audience.
​Be prepared to dance, laugh, and feel all the feels as they play their way through originals and covers with roots in blues, Americana, folk, county, and rock n roll. Eddie O'Connor joins on percussion to round out this trio. 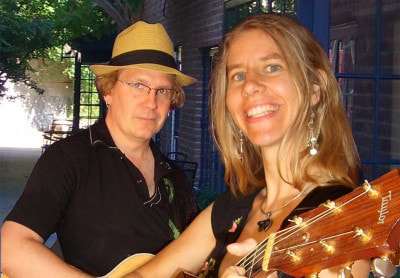 ​Nationally touring, award-winning songwriter Julie Patchouli and master guitarist Bruce Hecksel light up the air with their sparkling acoustic music and contagious chemistry. Patchouli’s down-to-earth songwriting is “new American folk,’ blending elements of folk, pop, flamenco and jazz with world beat rhythms.
Eighteen years of non-stop touring has honed this classically-trained duo, They are as busy in the studio as they are on the road, with 12 albums under their own brand and five CDs under the name Terra Guitarra, for their instrumental Spanish style guitar project.
Their latest album, “Firelight” was released on November 2014. “Patchouli live is amazing. Compare it to taking a yoga class in a field of running mustangs.” -City Pages
Visit their website at www.patchouli.net

In 2017 four local musicians got together with the intent of starting a new band. These musicians all shared a love of music from another time and were also devoted to preserving the legacy of Ethel Lerum. Their music is infectiously fun, toe tapping and danceable with lively polkas, beautiful waltzes, novelty songs, rags and reels.
​The members of Kickapoo Joy Juice include Jesse Downs on fiddle and accordion and Liz Voz on guitar. Liz and Jesse have been in the area for over ten years, farming, playing music together and calling square dances. David Gibbs plays the clarinet. A Gays Mills native, David has returned to the area after two decades in San Francisco performing and teaching music. Jane Keeley, a familiar face in the Driftless music scene, plays the stand-up bass. You will love the band’s new take on old-time. 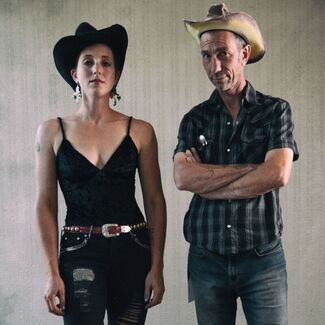 The Sapsuckers write and perform original country/Americana songs that blend humor, heartache, and honky-tonk.
With an eclectic style that ranges from hillbilly roots to Nashville pop, the songwriting team of Nikki Grossman and Joe Hart has developed a lively, contemporary take on country music. Their creative lyrics, catchy melodies, and clever stage show have earned them a growing fanbase in the Midwest and beyond.
The couple (on stage and off) got their start together as an old-time fiddle band, performing for square and contra dances, with Grossman on fiddle and Hart on guitar. Both had performed in a variety of musical acts—including prog rock, punk rock, and other old-time outfits—and an early connection was their interest in reproducing the close-harmony sounds of early country duos like the Blue Sky Boys and Callahan Brothers. Gifted writers and self-described country music dorks, they soon started writing and performing their own songs.
The duo has recorded three albums.
You can learn more at ​https://sapsuckersmusic.com/