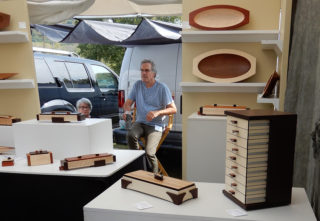 Ray Bock is an accomplished woodworker who has lived on a farm near Viroqua, WI. for the last 25 years.
2017 Best of Show Award
Sponsored by J Gallery Interior Design Studio, La Crosse, WI

The 2017 Best of Show Award was won by Ray Bock, an accomplished woodworker who has lived for the last 25 years on a farm near Viroqua, Wisconsin. Ray studied design and photography at the Illinois Institute of Technology where he received a BA in Design in 1981. After ten years working in commercial photography, Ray left Chicago for his family farm, and focused on designing and making custom furniture. His desire to experiment with new designs and construction techniques led him to making architecturally-inspired boxed in exotic and figured solid woods, which he has done since 2008. Ray has exhibited in many national craft shows and recently was included in the prestigious Smithsonian show. 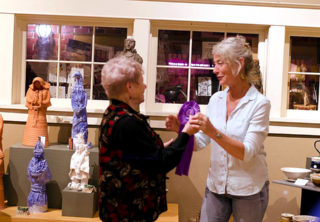 The second Merit Award went to Joe Schwarte of Gays Mills, Wisconsin. A Chicago native, he designed his first piece of furniture in 1967 while in the Army. The GI Bill allowed him to study at the American Academy of Art while he worked in the construction trades. He saw his future while viewing an exhibit at the Art Institute of Chicago in 1973—“The Arts and Crafts Movement in American 1876-1914.” He saw furniture that was functional, beautiful and sculptural, all characteristics of the furniture Joe has created since. His work is in homes from New York to Los Angeles, and has been shown in many publications